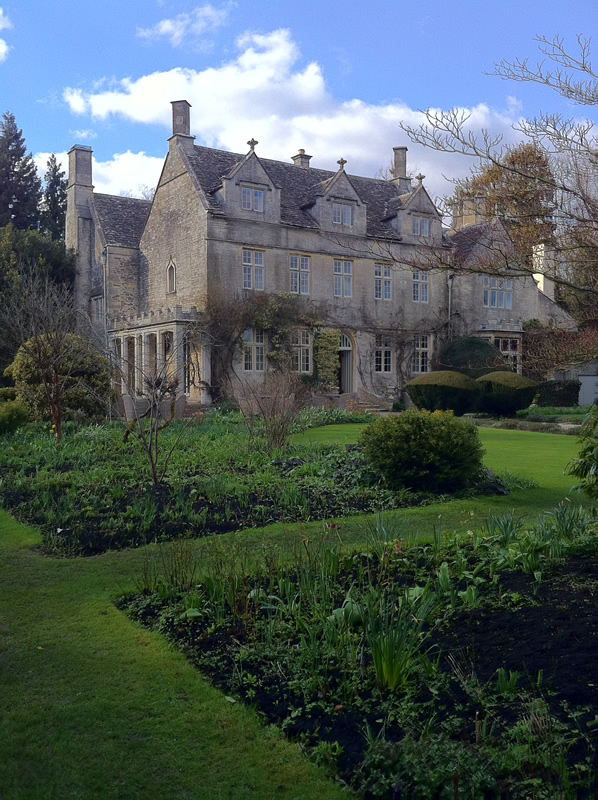 Since Rosemary Verey’s garden at Barnsley House in the Cotswolds has become a very nice country hotel and restaurant, the only way to see the garden these days is to join the garden club or eating there. The latter seemed the better option and with Mother’s Day (who is also a keen gardener and has been to the property before, back when Rosemary was still running the garden), it was a perfect opportunity.

Brilliant March blue skies and scudding clouds, lunch waiting after a drive through the rolling Cotswolds, with a stroll round the gardens to follow. Mmmm… A gravel drive, curving up to a golden stone manor house, dating from 1697 painted a picture of what was to follow. Reception with attentive staff who seemed to read your mind – they didn’t even take a name, they just knew we were the table of four for 1pm, though maybe that was because there were four of us and it was just before 1pm.

We were shown to one of the gorgeous lounges, with a wood fire burning away behind a chainmail fire curtain, the glow of the golden Cotswold stone of the building, both inside and out, and wooden floor boards and lovely parquet flooring. An invitation to aperitifs was declined – it was a week day lunchtime and we had a long drive home – while we chose from the menu.

They have an a la carte menu as well as a very reasonably priced (£24 for three courses) fixed menu, The Garden Menu, which on the day of our visit was a wholly vegetarian menu of early spring vegetable dishes; we were spoilt for choice from three starters and another three main courses. After a glass of wine in the lounge and choosing from the menu, we passed through into the dining room, a beautifully spacious room overlooking the gardens. As the day was so warm, the windows were open allowing the sound of bird song to drift in, and glimpses of passing gardeners working in the beautiful setting, inside and out.

We both had choices from The Garden Menu – a rocket soup and a pear, walnut and spinach salad, the latter of which may had hazlenuts rather than walnuts I think but was all the better for it. My parents had some sort of salmon starter I think but by then I was lost in the salad.

Following this, I had the spring vegetable hash with Parmesan crumbs while Penny had the spinach risotto and my parents both had the house specialty, vincisgrassi, a dish of baked pasta with parma ham, porcini and truffles and adapted from an 18th century recipe. The vegetable hash was a glorious mound of lightly roasted new potatoes, topped with poached spring onions, broccoli, green leaves and topped with an unadvertised but very welcome, perfectly poached egg. The risotto was greener than a sea-sick frog but far more pleasant – I suspect that some of the spinach had been liquidised into a puree to achieve the depth of colour.

Seeing that for the fixed menu included dessert for only £3 more, I went for the cheese board (what a surprise, my inner mouse once again) and Penny had a burnt cream with poached rhubarb; a (Spanish?) creme brulee with what was perhaps a slightly diverting addition in the rhubarb. It looked and tasted great, it was just a little bit unwieldy on the plate as the cream sat on top of the rhubarb.

By now, we were in a very happy place. Finishing with coffees, the staff showed us the way out – via the garden opening from the dining room onto a the yew walk (in one of the pictures above). Sadly these yews had to be cut back from their previous conical spire shape, according to Rosemary’s grandson who we met working in the gardens. They used to wire them together to keep their shape but gravity had won out and they’d been scalped to the bowl shapes you can see here. They had recovered their greenery well – for those who know Sissinghurst, think of the long walls of yew across the top of the meadow and how long they’ve taken to recover.

One beautiful idea we saw there was a circular box hedge around a tree, underplanted with cyclamen. We’re definitely going to borrow that idea, though sadly we can’t quite borrow some of the other beautiful things we saw there in our own space – a potager with brick paths mixing flowers for the house with vegetables and salads for the kitchen, the field of vegetable borders with early rhubarb, rows of spring salads such as American land cress (very peppery when we stole a quick taste) and you really do need the space for the poly tunnels that supply the kitchen in volume.