Within the Luxembourg range, the Luxembourg large low table or garden bench is a great companion to the range. Alternatively use it as a low bench when you need a few extra places to seat people.

In the Luxembourg range, use this as a low table to accompany the low armchair and low armchair duo; or as a foot rest with other chairs. It can also double up as a bench for extra seating, although please note that this bench is possibly a little low to be used with a table – for that the Luxembourg long bench is better suited.

It was in the 1920s that the Luxembourg low armchair first appeared along the pathways of the famous Paris park from which it takes its name; straight from the Parisian workshops that manufactured the first versions . Who could know then that, decades later, the workshop at Fermob dedicated to traditional crafts would recreate them? In the 1990s, at the request of the Jardin du Luxembourg, Fermob started manufacturing the armchair once again (although those versions are heavier, as they’re made of steel). 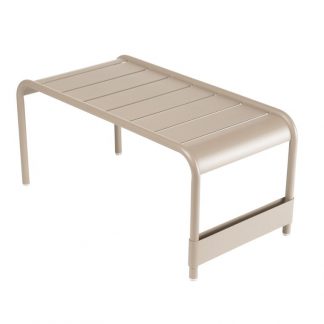 We’ll let you know as soon as we can.

We’re open for click-and-collect. So you can either order on line here on our website or contact us and we can have your order ready for collection.

As it’s January and too cold and quiet, I’m not going to be in the shop everyday; I’d rather be getting my hour of local exercise (explore-from-the-door, not cycle miles away…) looking at skies and trees.

Let us know when you’d like to collect and we’ll arrange to say a safely distanced “Hi!” and place your goods for collection in a bag on the doorstep for you to pickup.

Alternatively, you could always get one of our gift vouchers as a present – that way you don’t have to worry about what to choose.

The gift voucher is emailed directly to the recipient with a code that can be used on-line or in store (when we re-open), so you can even do it last minute (we won’t tell!).